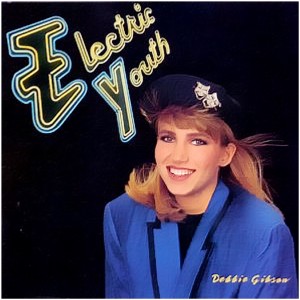 Debbie Gibson was my childhood musical idol. One fateful night in 1989, I was lucky enough to take her hand and dance the Roger Rabbit on stage beside her during her Electric Youth World Tour. Dreams were both made and realized that night.

I would spend hours listening to her cassette tapes and dancing in my room. I watched her music videos religiously and tried desperately to find a match to her signature black bowler hat for myself. I had her posters, books, and like a true super-fan, I owned a bottle of her signature fragrance, Electric Youth.

I relentlessly begged my mother to buy me Debbie’s perfume. After completely wearing her down, against her better judgment, she took me to Drug Emporium (remember that gem?) and agreed to buy me the small sized bottle. The offensively odorous fragrance came in a long, skinny, bright pink bottle, reminiscent of a large test tube. It contained a hot pink plastic spiral that floated around the spritzer straw inside. It was rad, but it smelled like ass. Stubbornly, I tried to wear it but I just couldn’t bear it; the stench was too atrocious. It smelled like the worst old-lady designer imposter perfume with notes of candy corns and sweet tarts. Musty, cheap, sweet, and tangy. Just what a third grader should smell like.

On my 9th birthday, after my family and I indulge in the best homemade chocolate cake with chocolate mocha icing, I open my gifts. To my delight, I unwrap a Magic Mousse Barbie; she has a switch on her back and when you flip it, she lifts her arms up to run her fingers through her hair. You know, like she is applying hair mousse? My second gift reveals a jewelry box that has come form my favorite store, Uptons (retail gem). I finally have a place to store all of my jelly bracelets and Charmie’s necklaces. I thank my family for the perfect presents and move to put my cake plate away.

Suddenly, my mother hands me an envelope. What is this? I thought the present portion of the party was over? I knew nothing of flat gifts. I had never been gifted with one. All of my presents of years past were Barbie’s, My Little Ponies, VHS movies, and clothes, all in boxes. What was this mysterious thing inside of an envelope? I felt nervous and unsettled.

I slowly unseal the curious casing to reveal three small pieces of thick paper. I see the words “Debbie Gibson” on them. I don’t understand, as I have never seen concert tickets before. I quizzically look at my mom. She excitedly shouts, “You, me, and your brother are going to see Debbie Gibson in concert!”

Miniature mind blown. I can’t believe it. I didn’t even know this was a possibility! My much older and cooler brother had made this happen the good old-fashioned way, by waiting in line at Turtle’s (musical gem) for these coveted concert tickets. It would be my very first live show and it was going to be freaking Debbie Gibson! My imagination ran wild with thoughts of what a concert was like to experience.

Being a true tiny fashionista, I focus on my perfect outfit. It is imperative that I not look baby-ish for my first concert. I must look more mature. My mom and I head to Marshalls and I start from the ground up. First, I choose some black pointy-toed lace up flats. Next, I spy some killer acid washed jeans including black side zippers along the calves. I top it off with white shirt peppered with black graphic embroidery that encircles the big black buttons running down the center. Once home, I try on my masterpiece and something is definitely off. There is a detail that I am missing.

After a thorough inspection and creative brainstorming, I know what I need. I take the black laces out of my new shoes and replace them with the white laces from my Keds. Perfection. I look older and cooler but not like I’m trying too hard. Operation Electric Youth Ensemble is complete. It sits in my closet for two months. I don’t dare touch it before the show, as I need my new garb to be sparkling clean and never seen before the big event. It will make its debut at the concert and I will surely turn heads. People may even mistake me for being a teenager, if I do my hair just right.

After waiting two whole months, the day of the show has finally arrived. I can hardly contain myself at school…